An increase in teenagers’ time spent online may be a factor for the increase and growing popularity of online radio services, like Pandora.
According to an Edison Research report, “Radio’s Future II: The 2010 American Youth Study,” media usage among teens and young adults are shifting.
In 2000, 74% of young adults, ages 12-24, listened to terrestrial radio. That percentage has sharply dwindled - as of 2010, only 41% of young adults listen to the radio. As many young people have given up their music and newspaper habits, the internet has replaced much of that activity. 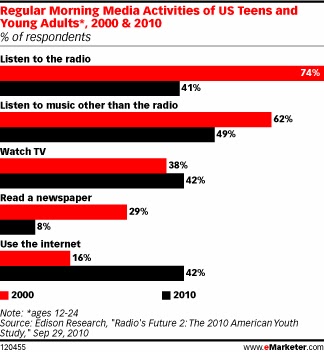 Online usage among teens and young adults has increased from 16% to 42%.
“The same trend is observable in total time spent with various media. In 2000, teens and young adults were spending close to 2 hours and 45 minutes listening to the radio each day. By 2010 it had fallen to an hour and a half. Time spent online had risen from an hour a day to almost 3.” 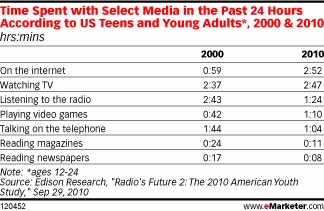 “Pandora is the clear front runner among online radio services, according to online listeners surveyed by Vision Critical in March. Pandora was cited as the favorite by 27%, and 42% had listened in the past year. No other service garnered more than a single-digit response.”