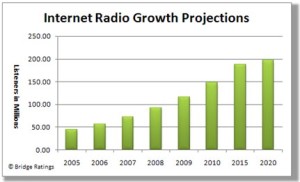 In the following media growth projections, Bridge Ratings estimates based on current trends that Internet radio will have 185 million listeners by 2020, 250 million will still be listening to terrestrial radio, and HD radio will have less than 10 million. Which will contribute more to radio’s financial future? 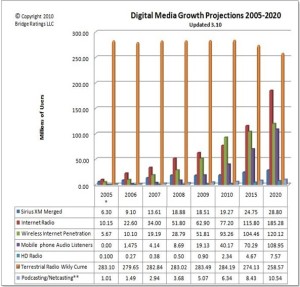 The Bottom Line
In 2005 Kagan Research forecast that U.S. terrestrial radio broadcasters would be earning four percent, or $805.2 million, of their total revenue from HD radio, mainly due to multicasting abilities. They also thought that advertising-supported “now” channels, that would offer local information such as all-the-time weather, sports and traffic, would bring in a large chunk of revenue. HD radio has not been developed as a revenue stream and these predictions have not come to pass.
ZenithOptimedia has reported to us that in 2009, advertisers spent approximately $260 million on Internet radio and another $28 million on podcasting for a combined total of $288 million, up 28% from 2008. Bridge Ratings analysis puts that number up 12.5% to $324 million and $394 million by 2011. 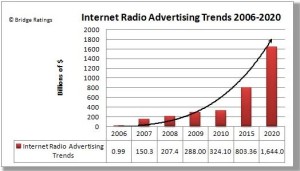 Estimates in the above chart are based on a composite calculation of all ad revenue generated through Internet Radio. These include: streaming ad revenue with the remainder divided among audio ads, music videos ad revenues, buttons, banners and sponsorships.
Streaming Helps Traditional Radio
“Streamies” and “Simuls”, those listening primarily to AM/FM simulcasts via the Internet are spending more time listening to Internet radio than six months prior. 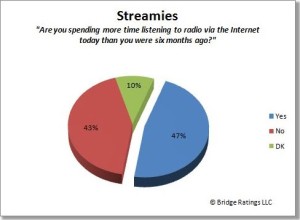 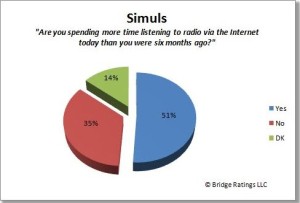 ….and “simuls” are spending more time with the AM/FM counterparts to their Internet streams. 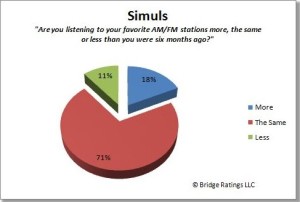 Growth in listening to both simulcast (AM/FM) streaming and the terrestrial counterparts would suggest that each is having a positive impact on each other.
The Bridge study found that this growth is not generally a forgone conclusion, but rather is highly reliant on proper marketing and cross promotion. We see strong evidence in this when examining each of the broadcast groups listener consumption patterns. 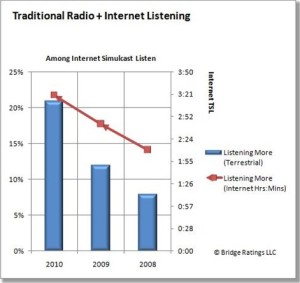 Bridge Ratings’ projections for mobile phone audio audience size by 2015 could reach 40 million. This compares with our estimates for terrestrial (274M), satellite radio (25M) and HD radio (5M).
Traditional radio companies are finding insufficient resources for the type of development of new media content and strategies needed to transition with its future audiences who today are between 10 and 24 years of age.
Total Internet advertising surpassed that of traditional radio in 2008 and Internet radio advertising will show 12-20% growth this decade, traditional radio companies should see the benefit of fully developing compelling Internet radio content and highly trained sales forces.
Their mission, should they decide to accept it, is to invest in and develop brand content for mobile media such as cell phones. It is clear from these Bridge Ratings’ statistics that Internet radio’s ROI potential is on much firmer ground for the future and should be developed and sold aggressively.
Sample: 3500 persons 12+, random telephone interviewing, Internet panel interviewing on a national footprint. Interviews were conducted between December 1 and February 14, 2010.
2010 Bridge Ratings, LLC
Blog
No tags