SNL Kagan recently published an updated 2010 analysis of Internet Radio.
While the major radio broadcast names such as CBS and Clear Channel Communications are receiving the bulk of Internet radio ad revenues, based on publicly reported data, on the strength of their well-established local audiences, Internet radio pureplay Pandora Media has shown it can be profitable without the tower component, doubling its revenues and audience in 2009.
According to the Arbitron-Edison Research Infinite Dial 2009 study released April 8, Kagan notes the weekly average online radio audience remained steady at 17% of the age 12+ U.S. population through 2/10. After growing from 33 million in 2008 to 42 million in 2009, the online radio audience has leveled out as broadband penetration among those who have Internet access has matured at 84%.
The study also revealed that the percentage of monthly online listeners streaming Internet-only stations has overtaken the percentage listening to AM/FM stations' simulcast streams, at 55 percent versus 40 percent.
In SNL Kagan’s updated analysis, they developed a table of major providers’ which includes average monthly Unique users.
Click on the chart to enlarge: 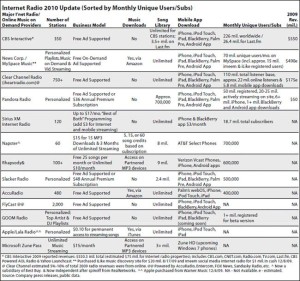