Do You Know The Latest Online Ad Growth Statistics?

Now You Knew This All Along, Right?

According to BIA/Kelsey, local radio stations saw a 15.1 percent increase to $439 million for total industry online revenues for 2011. With the 1st qtr of '12 coming to a close, they expect similar growth to continue for the rest of the year with a compounded annual growth rate of 11.8 percent for radio from 2011-2016. We are talking ONLINE AD REVENUE! Check out the growth chart for TV and Radio through 2016! Aren't you glad you are streaming online? But are you taking full advantage of all the tools we have available to help you earn revenue from all those desktop and mobile listener sessions? 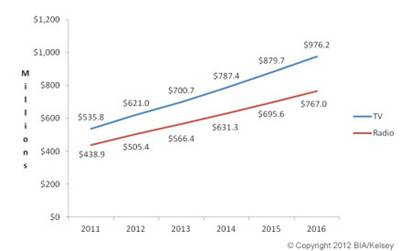 ﻿Accustream Research's latest report entitled 'Online Video Value Chain 2012' states that the online and mobile video value chain (comprising CDN, integrated video platforms, full service advertising networks, ad serving platforms, auctions and exchanges) produced a combined $4.3 billion in top line revenue in 2011, an increase of 45% over 2010. It goes on to state 'double-digit revenue growth of 30% annually projected across all value chain sectors yields a $10 billion market by 2014, according to the 545 page multi-disciplinary research report.'
As you may already know, video pre-roll and in-stream ads are a big part of our ADNet platform and offers the highest-paying CPMs in the online ad world. You not only earn revenue each month from top-brand advertisers, but you also build credibility and value with your online listening audience.

Now, as if that wasn't enough, aren't you glad you decided to operate a radio station now?...instead of a newspaper?? US newspaper and print ad revenue has fallen off a cliff, only to land on the sunny shores of online advertising. That's right, companies are still spending the same increasing amounts of annual ad dollars, but in a different arena....online advertising. Oh boy, that's what you do! Did you know you are a publisher? That's right!
Your desktop players and mobile apps (assuming you have joined our ADNet and are getting revenue checks every month) are all part of the new media....online advertising. But hey, it's not so new anymore, and many station owners have realized that listeners today have come to expect and accept online and mobile ads. Check out this chart from The Verge which peaks out coincidental with the dot-com explosion....like I said, aren't you glad you aren't a newspaper publisher? 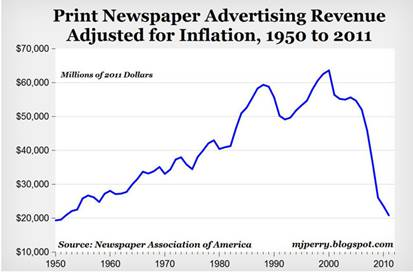 ﻿And then to top it all off, the railroad track of our new growth markets, the internet, now accounts for 4.7% of the entire US economy! According to Boston Consulting Group, the internet accounted for $684 billion, or 4.7% of all U.S. economic activity in 2010. By way of comparison, the federal government contributed $625 billion, or 4.3%, to the nation's output. If it was considered its own separate industry, the internet would also be larger than America's education, construction or agricultural sectors.
So here you are, in the radio industry which is growing in online ad spending revenue and listenership....are you using all the tools available to help you maximize the revenue that is available to you? If you are not using all of our features; mobile apps, social media tools, ADNet, let us know. We want to help you get the most out of your streaming and cater to your listeners the top-notch services they have come to expect in today's online listener's world!
Blog
No tags