Streaming technology to distribute Internet Radio already existed more than ten years ago, when the first audio streams were available on the World Wide Web. However, for a long time it was only possible to listen to Internet Radio via a PC.
Nowadays tabletop Radios are not only able to receive several thousand radio stations from all over the world via the Internet; the feature can now also be found in Audio Home Systems, Hi-Fi Receivers, Tuners and even Radio Recorders and Clock Radios. In the majority of the audio product groups, the share of Internet radio is still low. 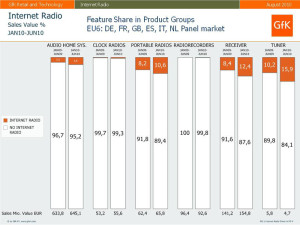 With a growth rate of +33.9% in six European countries (EU 6*) between January and June 2010 compared to the previous year Internet Radio is currently one of the fastest growing segments within Audio.
*EU 6: Germany, France, Great Britain, Spain, Italy and the Netherlands
Source: http://bit.ly/bcdDLY
Blog
No tags