Did you know that you can earn even more revenue by the ads running on your mobile streaming apps? Our Ad Delivery Network is not just limited to the desktop player; our iOS and Android apps are also part of the mix. You should be promoting your mobile apps just like you are promoting your desktop player. The more you promote, the more listeners you'll gain on other mediums, and the more ad revenue you can earn for your station(s). One listener can spend hours on your desktop player or mobile apps, which equates to a nice earning... just multiply that by hundreds or thousands of listener sessions and you can be raking in some good money.  The ads on the mobile apps are displayed at the top on every screen, so they are always in sight and never hidden.

According to Arbitron's 'The Infinite Dial 2013,' one in five Americans have used their cell phone to listen to online radio in their car via a stream from a cell phone connected to their car stereo. You can see the year-to-year jump. 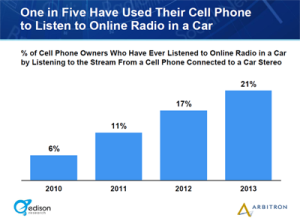 Here are some ideas to help promote your apps:

These are just some ways to help promote your mobile apps to get more listeners and generate more ad revenue. As long as you continuously remind listeners that they can listen via mobile, they'll eventually make it a habit. Our Cirrus™ Player, along with our version 5 iOS and Android apps, have loads of great features that your listeners will love. Make sure you're on the latest versions today by opening a ticket here.