The Latest on Automotive-Based Internet Radio

As the world of online radio streaming continues to grow, more and more broadcasters are keeping a keen eye on the shift to other means and methods of listening to their traditional AM/FM programming. I have recently written about the fact that most traditional terrestrial listeners are still listening, just at different times of day, and via different means, such as desktop, mobile and cars.
Wait a minute; aren't we already in cars, you might ask? Well of course, but we're not talking about the old car radio head revolution....we're talking about the internet-enabled car radio head revolution. More and more cars are coming to market with internet access and built-in internet tuners that allow one to pick up 100,000+ stations from around the world in some cases. Chances are, if you are streaming, even for a short time, your station is most likely available on these new tuners via applications like Reciva and TuneIn. 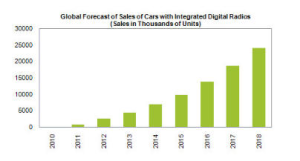 The latest research report from IHS iSuppli Automotive Research shows that the number of automobiles with internet radios integrated into the car will explode to over 24 million units by 2018, a huge increase from 168,000 in 2010. The US market will lead in internet radio sales for automobiles, with over 10 million units, or almost 42% of the world market.
The latest shift in technology of internet-enabled radio heads is towards computer-based programs like SYNC, where functionality is performed by individual applications....think smartphones. The trend is also towards bundled entertainment apps like Pandora, Slacker Radio, Reciva, TuneIn and others that allow listeners to select virtually any station they want from anywhere in the world.
Car maker, Scion, has just launched 17 internet stations. The channels are non-customizable Live365 streams and contain exclusive programming. The real news here is that the new Scion xB includes dashboard smartphone support; Bluetooth streaming, iTunes tagging, USB and more, all controlled via a 5.8 inch touchscreen.
Ford and Toyota just partnered on web-connected car standards for telematics. They are looking for ways to make the in-car technology safer, more secure, and easier to use. Of course, they will be supporting internet radio, like all the car manufacturers are beginning to do, and will also be embracing smartphone dashboard integration as well.
All in all, there are over 50 car models in the US that already have internet radio apps built into their radio heads, or will be by the 2012 model. Europe is running far behind on this, with only BMW and Mini offering internet radio so far. Even China already has 4 car models coming to market that can tune in your favorite station.
What does this mean for today's terrestrial and internet broadcasters?
You need to be online and streaming in either AAC+ or MP3, the 2 formats adopted by the IEC (International Electrotechnical Commission) and the ISO (International Organization for Standardization) to be able to ubiquitously stream to all devices, desktops, and mobile phones.
This huge growth market is being supported by geo-targeted advertising, a medium that should reach $18 billion by 2016. Another reason to be taking advantage of the latest streaming formats and technologies that are out there!
For more information on streaming your broadcast in high-quality AAC+ or MP3, check out Radio Streaming Services, or send an email to info@securenetsystems.net.
Kerry Brewer is Sr. Managing Director at Securenet Systems, a leading provider of online streaming services to the worldwide radio industry. He can be reached at kbrewer@securenetsystems.net or on LinkedIn at www.linkedin.com/in/kerrybrewer.
Blog
No tags